Old Believers Church of the Nativity of the Virgin 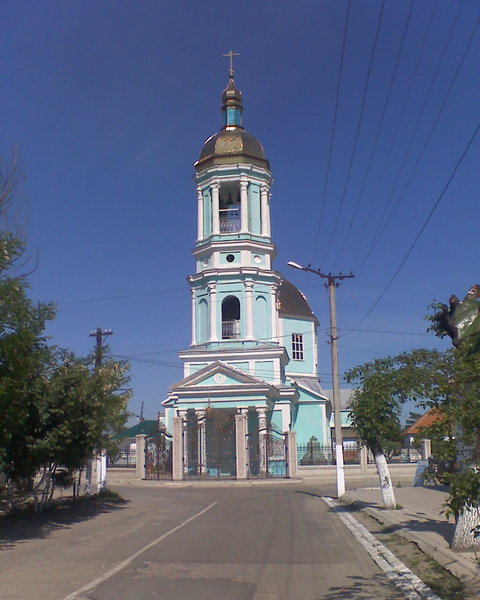 He stood and stands in the heart of the city. He was prepared for the dramatic fate, its existence is related cautionary tale. Church of the Nativity of the Blessed Virgin was not built at once and not in the place where it stands today.

According to the stories of old residents, who heard it from their grandfathers, great-grandfathers, Old Believers' Chapel, as well as a Turkish mosque in the settlement Vylkove existed since the end of the XVIII century. Where was the first Orthodox church, has been lost, but the foundation of the mosque was found at the site, was cast into the construction of the Palace of the fishermen in the late 50's - early 60-ies of XX century.

About 1790 in one of the alleys of the central part of the saga tenements paved and built a wooden chapel in the name of the Holy Virgin. By this time already existed in Vilkovo Orthodox Church of the Intercession, in which the praying Cossacks. However, the same naming chosen for its Chapel and the Old Believers. It is known that she burned and rebuilt several times (1849, 1853.). Finally, gathering adherents staroverchestva decided to build a new capital church. Naturally, for the construction of such a structure was needed time and money. Therefore, subject to the need to have opened a temporary house of worship ( "chapel").

Before our time I live in a small alley in front of a vacant lot №2 secondary school, which is called "the prayer." His name and associated with the temporary shelter of religious Believers.

Old-timers say that the new church was finished in 1854 -. 1855, XIX century historian specifies the date and calls the year of opening the capital construction 1857.

He and complements the information: it turns out, by order of the governor of Tulcea oak on the construction carried on with. Flying temple consecrated Arkady Vasluys cue. In prayer summoned by hitting Bill (mace) in Bells (iron board). Today's Church of the Nativity regent Vasily Karasev Yeremeyevich recalls that before its closure in the early 60s. XX century. Bill and Bells used to send everyday services and funerals.

After the closure of the central temple of Christmas icons and church plates were transferred to St. Nicholas (island) church, its bell tower and then there were called beater and the board on which they hit.

For a time after the end of construction, "20 years or so," Christmas Old Believer church had no steeple. It was crowned "octagon" (large dome), which reached the height of 16-18 m. The historian-regional specialist GP Bahtalovsky calls the date of erection of the bell tower. It is the year 1873. Her height - 16 fathoms (32 m). Bells were 6, among them - Stopudoviy, who ascended to the belfry a little later - in the early 1880s. It has a unique label, a fragment of which is reproduced here: "This bell was poured Bessarabia region Izmail district in posad Vilkov Old Believer church of the Nativity of the Mother of God (...) to mark the accession of sympathy At the edge of the Danube-packs to a vast bogohra Nimoy-Russian Power .. . '.

In early 1901, the church was surrounded by a cast openwork fence. In 1962, the order of the official state power the church was closed. The last service was held at the temple on September 26, the title.

First place was given to a warehouse RybKOOPu, then it was attached to a small children's chess club, then on the territory of the church culture tried to organize a children's playground and swings brought. But the churchyard suddenly lost its green lawn, the trees have dried up, the feeling of abandonment became dominant. In areas found shelter strange, mostly drunk person. In the end, there was a fire - the main part of the church buildings burned down in February 1980.

With the beginning of perestroika militant atheism began to take positions, and in 1990, the initiative group of parishioners led by Semyon Denisovich Vlasenko asked the city council with a request for permission to rebuild the church Christmas. Permission was granted. Most of the funds raised for the restoration of the church of the Nativity of the Blessed Virgin Mary, made private donations; money and materials to help local businesses, not left behind the local and regional administration.

The official consultant for the construction was the Kiev Institute of Urban Development. Accounting and control of resources selected individuals was conducted. Worked "the whole world", and with great enthusiasm. His church has experienced a second birth September 12, 1993. On its opening was attended by Metropolitan of Moscow and All Russia Alimpiy, Bishop of Kiev and Vinnitsa Savvaty. Archpriest of Izmail. John of Novgorod. Leonid, six priests, among them - on. Alexis (temporary rector of the Church of the Nativity), about. Mercury, the rector of the church of St. Nicholas the Wonderworker. All-Night Vigil September 21, 1993 started a permanent ministry in the church.

Church Accounting books and keep the following information. Since its construction until the present time, the church was headed for. Timothy (Vasilyev) on. Porphyry (Goncharov) and his son about. Gregory of. Leonty about. Efimov, archpriest about. John, archpriest about. Maxim, Archpriest of. Moses. October 21, 1995 was dedicated here to the abbots of the youngdeacon. Sergius, who serves in the church of the Nativity of the Blessed Virgin Mary and is now archpriest.